“Your second visit should be to a Gothic or Victorian Gothic revival church or cathedral. ” Course Notes.

Southwark is a small cathedral on London’s Southbank. Its plan is a traditional cross shape with western entrances and other adjacent buildings connected via a modern glass covered walkway.

The Catherdral, then just a church, dates back to the early 12th century but was rebuilt in the Early Gothic style after a ‘disastrous’ fire in 1212 damaged the church, priory, and hospital. The oldest complete part of the building, the Choir and Retrochoir, still dates from 1212 and is now the oldest gothic building in London. At the end of the Choir is the Great Screen built in 1520 and embellished with statues in 1905 (when it was officially named a Cathedral). The Nave has been replaced several times since then, the current one dates from 1897 designed by Sir Arthur Blomfield.

The stone roof collapsed in 1469 and was replaced by a wooden one, some of the carvings from that ceiling still survive. – in the bottom of this photo: 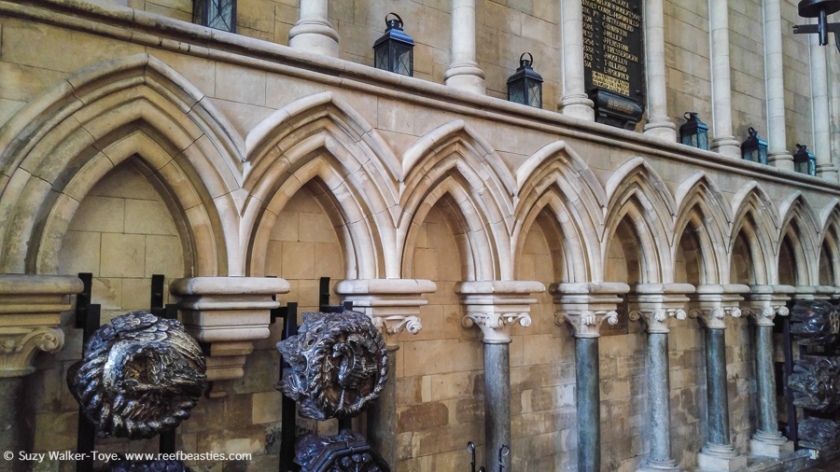 “At the West End is a window designed by Henry Holiday showing scenes of the Creation.”

Most of the clustered column capitals throughout were plain but a couple of columns at the back of the Nave looked to have a stiff-leaf capital.

The CROSSING and TRANSEPTS:

Vaulted ceilings in the Transepts are two stories high, with large pointed arched windows (with stained glass and octofoil window in the north and plain glass but elaborate curvilinear tracery in the south).

The North and South Transepts, filled with various 17th and 18th century monuments, were built in 1283 and 1310 respectively, however the current south transept is the result of another fire related rebuild in the 1390s. This time they took the opportunity to increase the height of the tower and restored the chapel. The tracery in the South Transept looks to be of Decorated style (equivalent to flamboyant style in Europe).

Arches leading to the choir aisles differ slightly in shape on each side of the church, on the south a usual equilateral arch, on the north is a stilted arch, (one side has been flattened) to allow for the tower staircase. The stilted arch can be seen in this photo below, to the left of the pulpit.

“The Crossing under the central tower has four piers, flattened on the inner sides, dating from the 14th century. Suspended here is a splendid chandelier given by an innkeeper’s wife, in 1680.”

The CHOIR and Great Screen:

The Choir is Early English style. The Choir stalls are of ornately carved wood. There are also elaborate wooden screens, tombs and monuments across the five bays each side.

The piers are alternately circular and octagonal leading up to triple vaulting shafts for the ceiling. The Altarpiece has gold leaf geometric patterns and religious sculptures which melt into a wall of statues on the Great Screen.

“The Pulpit, Stalls, and Bishop’s throne, or ‘cathedra’, all date from the 19th and 20th centuries.”

The Great Screen was built in 1520 and embellished with (‘New Jerusalem’ style) statues in 1905 when it was officially named a Cathedral.

The oldest complete part of the building, the Choir and Retrochoir, still dates from 1212 making it the oldest gothic building in London. It has some random blind tracery at the back of the chapels

todo – revisit and photograph the roman wall behind

Outside, the retrochoir is seen as a symmetrical set of four chapels topped with gables and lancet windows. Behind them on the sanctuary tower above the main stained glass is a small rose window not visible from inside. The square central tower rises up, with four spiral pinnacles and a clock.

In the South churchyard, you can see medieval pointed arch windows with geometric tracery (retrochoir) and further along, that newer curvilinear tracery in South Transept windows and the sweep of the flying buttresses as they support the upper level of the building. Quoins edge the buttresses and cornerstones of the building in a different brick which makes an attractive pattern.

The facade at the west end of the cathedral shows equilateral arch stained glass windows with symmetrical blind tracery arches. Above, a strip of arabesque molding and two pointed religious medallion moldings. Higher up there are some more lancet windows with shutter blinds in them.

I have captioned the following images in detail to explain each feature of the photos: Click them for larger. There are some extra ones in this gallery that are not above.

Most recent blog: https://sketchandcrochet.wordpress.com/ For drawing and occasionally crochet posts View all posts by Suzy Walker-Toye

One thought on “Visit: A Gothic Church”

Recent: Memoirs of an Underwater Photographer

Just back from Cayman